In 1673 the outworks proved unable to resist Vauban's new method of attack. The battle was fought mainly in the area in front of the Toingersepoort were d'Artagnan, the hero of the three Musketeers was killed. 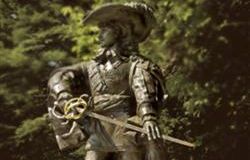 A plan of Vauban's for a complete renovation was not carried out, but when Maastricht in 1678 returned to the Republic the famous military engineer had fortified weak points by means of lunettes, and had carried out a virtual renewal and further extension of the southern inundation system, between Maas and Jeker. The ditch in the city moat, carrying water from the Jeker upsteam of the Hoge Fronten to the so-called Lage Fronten (low fronts) in the north, had been replaced vy vaulted aqueduct, 1165 metres in length, the so-called Jeker channel, which was found back practically undamaged in 1943. From the last quarter of the 17th century the system of fortifications spread steadily. This happened initially under the pressure of the war against France, between 1688 an 1713, and later against the background of the siege of 1748 and the discovery that the barrier town in the southern Netherlands were of no value for the defence of the country. In the first phase most work was done in the Hge Fronten, which, under the supervision of Georg Frederick, count of Waldeck, were fortified with the new bastions and other defence works. The plans came from baron Daniel Wolff von Dopff, the military engineer who became governor in the year 1706. The principal fortification built at this time was the Fort Sint Pieter, on the northern slope of the mountain of that name. It was designed by baron Dopff in the years 1701-1702, and was meant to prevent a bombardment of the town from the heights of the mountain, such as had taken place in 1673, and to attack the 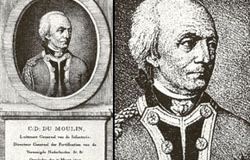 flank of enemy troops approaching the town from the west. After half a century of inactivity and neglect, a large-scale modernization was begun after 1750. This was carried out under the supervision of the military governor Hobbe, baron Aylva, and Charles, prince of Nassau-Weilburg, to "genaral profects" drwan up by the directors of fortifications Pieter de la Rive (1746-1771) and Carel du Moulin (1772-1774).

De la Rive maintained the existing situation where this was possible, but aimed at eliminating the defects and deficiencies by demolishing useless fortifications, including some hornworks, and by improving old and constructing new defence works. In the years 1764-1771, especially, several tens of bastions,lunettes, counterguards and other outworks were built. Remnant of the bastion Wilhelmina on the Jeker and of the lunette Sint Pieter on the Maas still bear witness to this fruitfull building activity. The system of fortifications had meanwhile grown to the extent that it could no longer be defended by a garrison of normal strenght. Du Moulin's general modernization plan ( 1772-1775), inspired by views of the great military architect Menno van Coehoorn, provided for a slimming and simplification of the ring of fortifications, and involved the use of brickwork on a larger scale, for the claddering of earthworks and for other structural elements. Vaulted sallt-ports, or sorties, and caponiers, shell-proof passages covering the sorties and dry ditches, were to make possible effective defence in the event the enemy penetrated into this "fortress outside the walls".