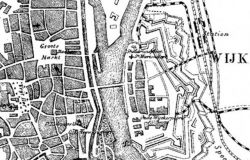 Also the small suburb of Wyck on the oppposite banl of the Maas always easely defensible because of its position in water rich terrain, was fortofied in teh 13th century. The tower commanding the approach to the Maas bridge was razed to the ground by troops of the bishop of Liege 1n 1267, but in 1284 and 1303 Wyck was strong enough to withstand attacks by Valkenburg and Liege troops. Nothing much is known about the nature of these fortifications, except that a stone enceinte was erected early in the 14the century. Some of the towers of this ring wall were built of marlstone blocks, other e.g. the Maaspunttoren, the old Lambrechtsrondeel at the southern end, and the Woutersrondeel- the so-called Kruittoren- at the northern end of the Maas wall, were clad with carboniferous sandstone. The ring wall had a gate giving access to the Maas bridge, two water gates, and two field gates: the Hoogbruggepoort ( or Duitsepoort) on the road to Aix-la-Chapelle, and the Sint-Maartenspoort on the north side. Anticipating more modern views, the magistrade around 1480 had an entirely new enceinte erected, enclosing the first ring wall. This new structure consisted of a double earthwork with six bulwarks, one of which contained the passage of the outer Sint-Maartensbuitenpoort. The existence of the second enceinte, which was later clad with masonry, sealed the fate of the first, which, like the firth ring wall around Maastricht, was bit by bit demolished. Of the Wyck fortifications, only the lower half of the Maas wall, with the waterpoort, rebuilt in 1897- and the Maaspunttoren- partly renovated in 1913- was spared. It is very unfortunate that the Kruittoren, an exceptionally beautiful example of 14th c. fortification works, was vandalously destroyed in 1868, robbing the riverside silhouette of one of its most characteristic landmarks.