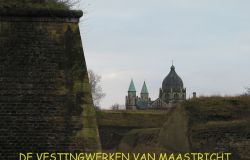 The fortification of Maastricht did not become urgent until after 1204 the city acquired greai military importance. Owing to its situation, and to the existence of the bridge across the Maas- the only between the Liege Lands end the sea untill the second half of the 19th century- Maastricht became starting point for Brabant's extention towards teh east, which was aimed at gaining control of te trade route to Cologne. The buiding of the fortifications was a matter for the city as indeed was the military defence of the town in general. It was paid for and carried out by the citizenry, but stimulated, supported and - later - conducted from Brussels. In spite of the dual seigniory, the role played by Liege in this matter was definitely a minor one.