burrowing in the ground

In addition to the labyrinth of marl quarries Maastricht possesses an underground network specially made for purpises of meiltary defence, which still extends the full lenght of the Hoge Fronten. Mine galleries were an indispensable element of the defensive positions, as, from the 16th century onwards, the ennemy had recourse to powder mines placed underground to blow breaches in the ring of fortifications. Counter-galleries were built with which enabled the defenders to detect the ennemy's approach under ground in good time, to render his explosive charges harmless, to blow up fortifications that had to be abadoned, and to prevent the storming of breaches. as the demolishing work carried out in 1868 was only superficial , the network underneathe the HOge Fronten remained virtually intact. 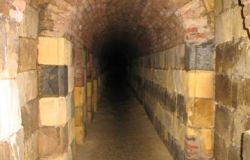 Besides specimens from earlier times - 1690,1747, 1755 and 1759 - it comprises mainly the mine system constructed between 1770-1785, which consist throughout of masonry: walls of marlstone and brick barrel-vaults, constructed on the principles laid down by Du Moulin, which with their liberal dimensions, show a higher degree of perfection. 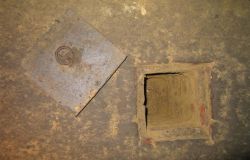 The secret labyrinth with its round, domed chambers, its staitways, spacious caponiers, powder rooms ant countless galleries, spelt mortal danger to the enemy, above and belw the suface. As soon as the approuch of he ennemy miners had been detected in the écoutes - specially built listening galleries- the defenders made a passage to the danger point from one of the many niches in the gallery walls, and tried to explode a charge there. When the enemy miners or commandos had penetrated into a mine system, they found there way blocked by numerous doors behind which were placed light mines, hidden in small pits, which coul make the roof crash down on the invaders.

At any moment and in any place the adcersary could hit in the dark. Burrowing in the ground like moles, attackers and defenders must have fought here under an unbearable strain. Nowadays, the subterranean labyrinth, in all about 10 km long is a unique fortification monument.